Only words with 2 or more characters are accepted
Max 200 chars total
Space is used to split words, "" can be used to search for a whole string (not indexed search then)
AND, OR and NOT are prefix words, overruling the default operator
+/|/- equals AND, OR and NOT as operators.
All search words are converted to lowercase. 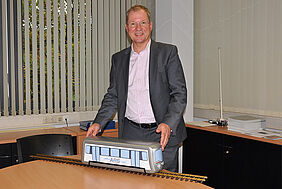 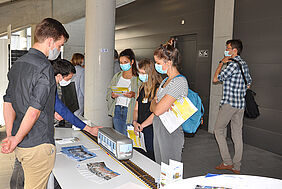 A model of the autonomous "Aachener Rail Shuttle" (ARS) on a scale of 1:24 was produced using a 3D printer. The drivable model has a distance sensor system which detects obstacles in the track. A "brake command" is then automatically given via an adapted control system of the propulsion system. The model is to be shown as an eye-catcher at events.

At the event "Care and Mobility Innovation" of the Erlebniswelt Mobilität Aachen, which took place on 22 September 2020 in Aachen's Soers, the IFS drew the attention of visitors to our "Aachen Rail Shuttle" project by presenting the model, among other things.